The cabinets in the sacristy were made between 1660-70. 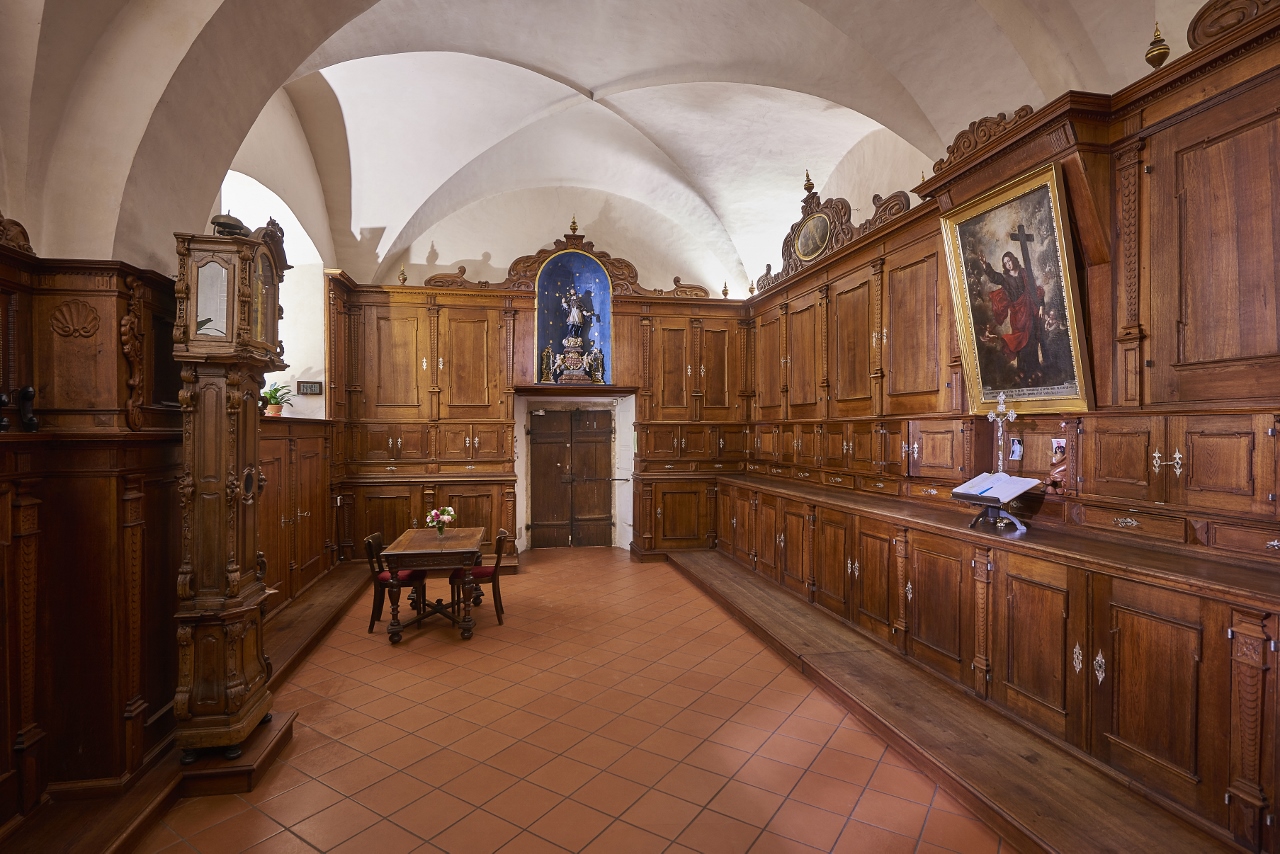 The historical Baroque altar has the form of a victory arch. It was built in 1717 from the design of Jan Ferdinand Schor in 1717 by Thomas of Jesus. The statues in the foreground depict St. Teresa of Jesus and St. John of the Cross. The prophets Elijah and Elisha are depicted on the sides. At the top between war trophies there is a copy of a painting with a Christmas theme, which was, according to legend, present at the Battle of the White Mountain in 1620. The large picture showing the intercession of the Virgin Mary is by Matthias Mayer (1627-1637). The altar reminds us, among other things, that it is better to win with spiritual than military weapons. The historic altar has been restored to its original form from the time of its creation, which combines copper and gold guilding.

The new altar table is the work of academic sculptor Otmar Oliva. The altar, which stands on bronze legs, is made of a single piece of onyx originating from Pakistan. The altar was sanctified in October 2015 to commemorate the 500th anniversary of the birth of the founder of the Carmelite Order, Teresa of Jesus. Three nails are depicted at the foot of the silver cross, which is also the work of Otmar Oliva.  These represent the nails with which Christ was pierced on the cross and are presented with the words of the Prophet Elijah, ” I have been very zealous for the Lord God of hosts” which are keywords of the order of Discalced Carmelites. 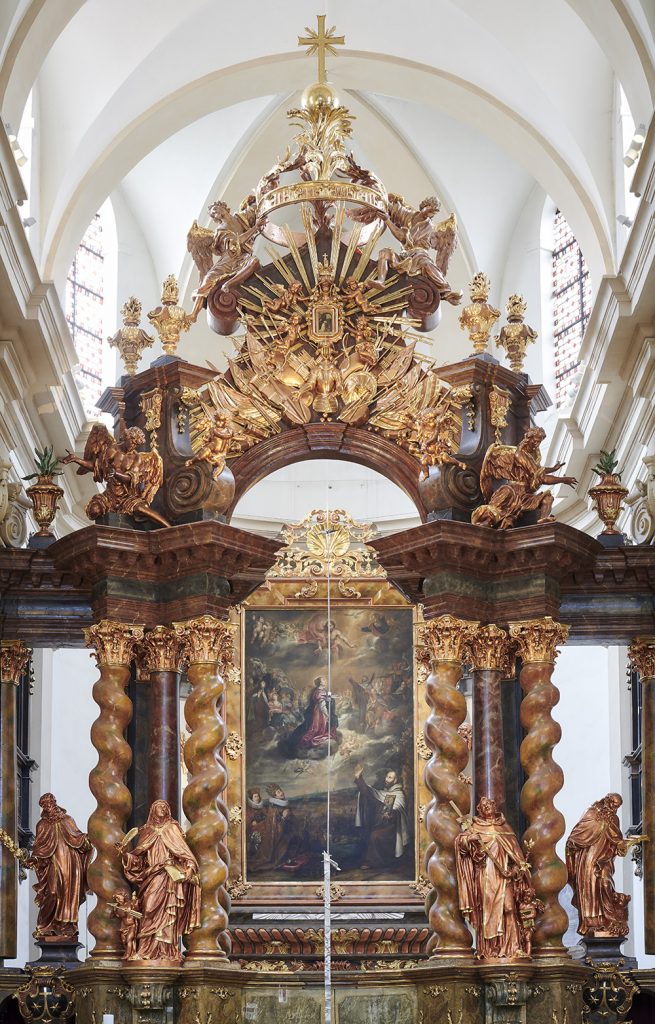 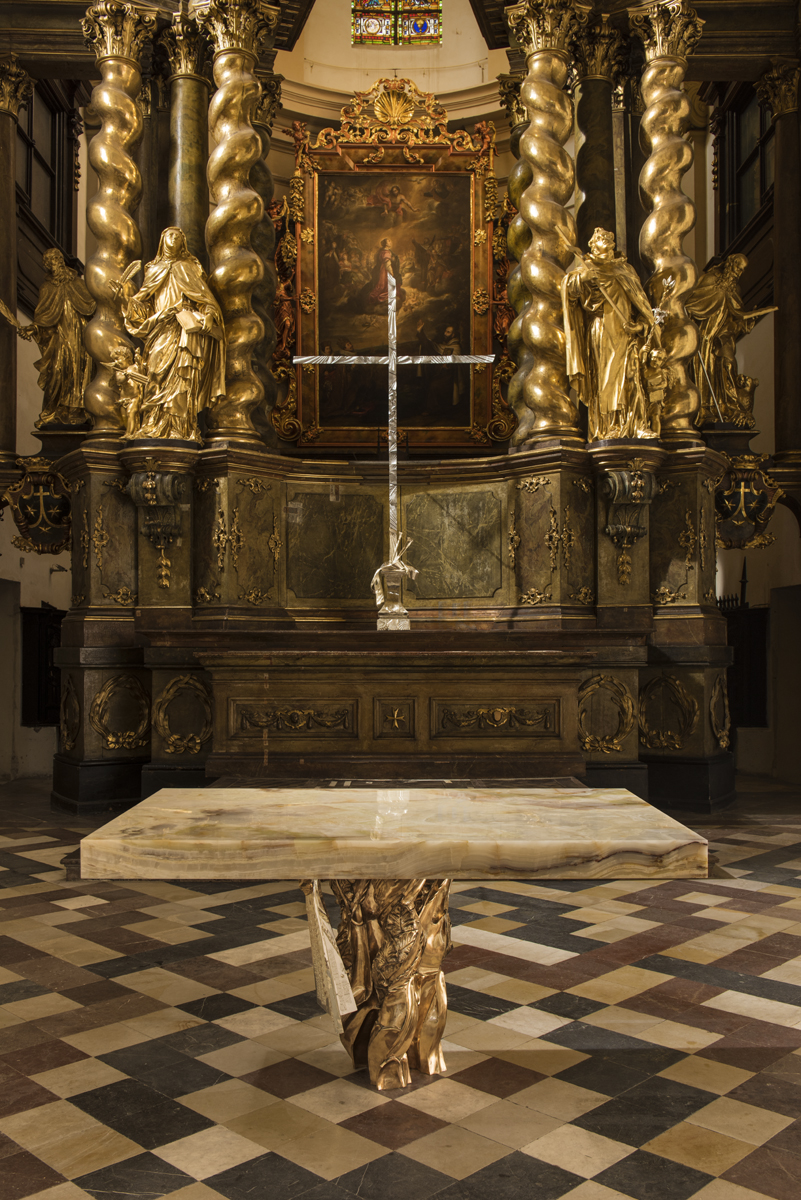 In the museum you can see ancient textiles used in the robes of the Prague Infant Jesus, robes from the Philippines, Shanghai, Colombia and Hanbok in South Korea. There is also a crown of the Infant Jesus from the rococo period and and a crown donated by Pope Benedict XVI in 2009. Life size art photographs of the statue in robes of various liturgical colours are exhibited in the staircase.  There is also an interesting display of nativity scenes from various parts of the world. 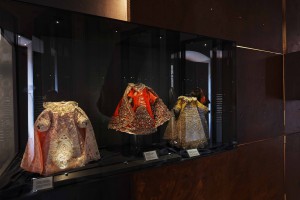 Altar of the Child Jesus

Altar of the Child Jesus

The statue of the Infant Jesus is in a glass case. On either side are statues of Our Lady and St. Joseph. God the Father is allegorically depicted as an old man. In the upper part of the altar, He is seen sending His Son to earth. At the very top is the Holy Spirit depicted as a dove. The statues are the work of Petr Prachner. The altar of red and grey marble was made by František Lauermann in 1776. 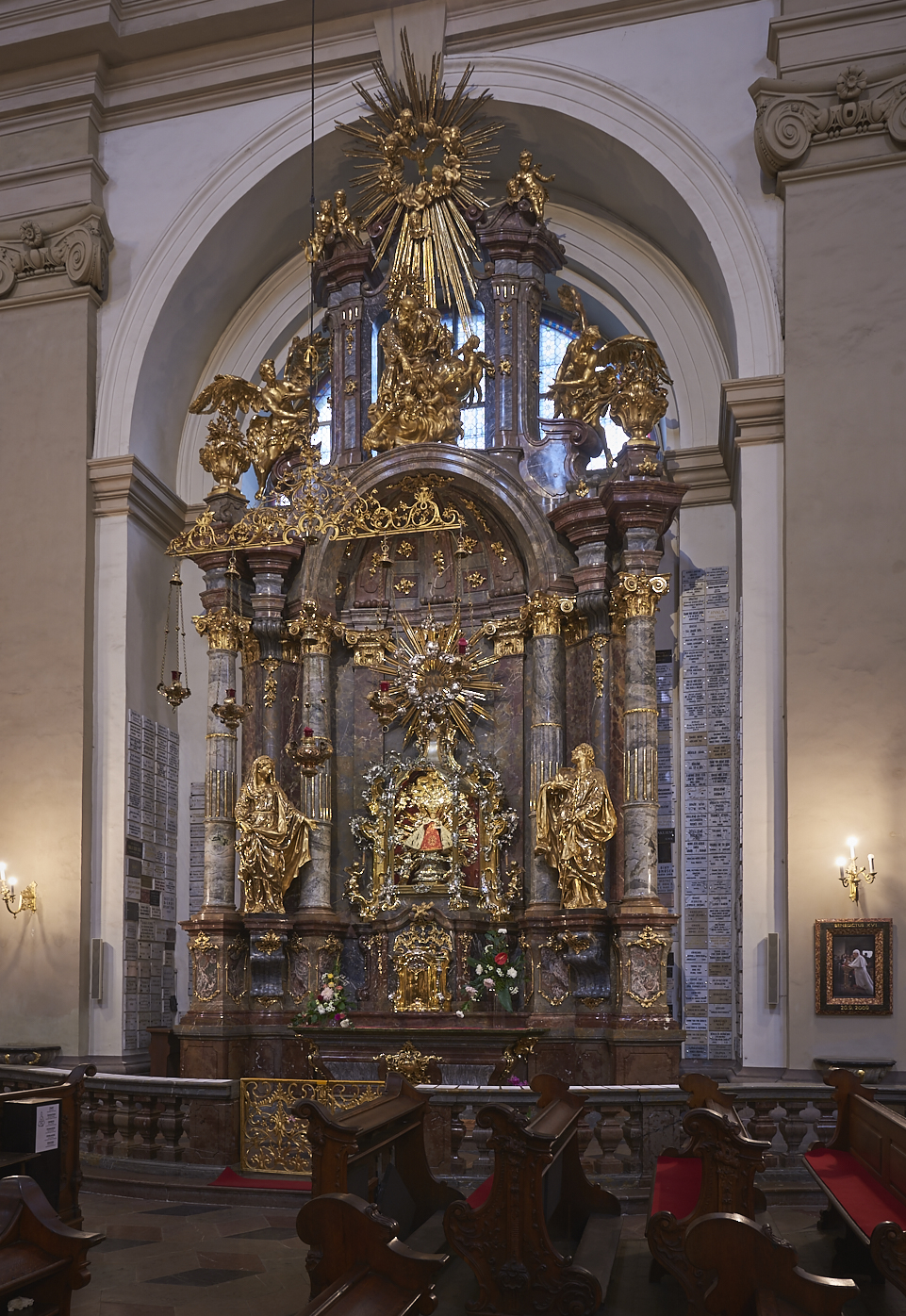 The Infant Jesus was located here in 1656 – 1776. It was used as a chapel for blessing people and objects. 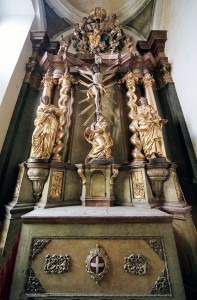 The monumental front from 1664 is above the entrance decorated with the statue of God’s Mother with child. 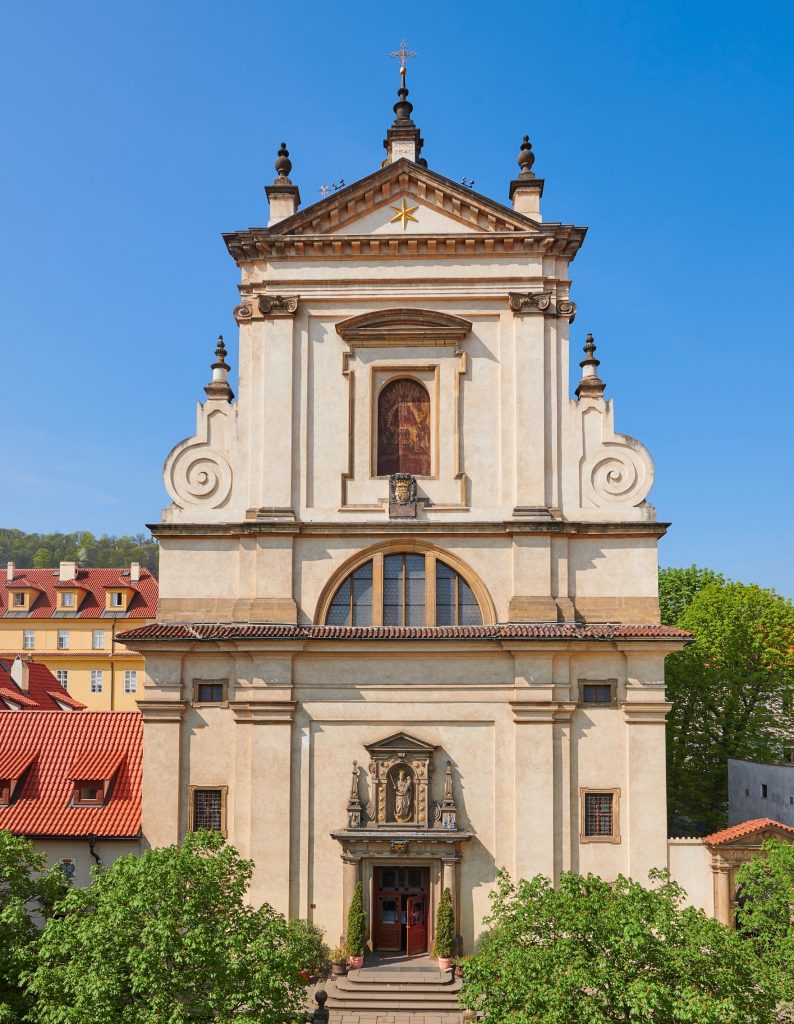 Altar of St. Simon Stock and Our Lady of the Scapular

Altar of St. Simon Stock and Our Lady of the Scapular

A picture of the General of the order receiving a scapular form God’s Mother was painted before 1720 by Petr Brandl. 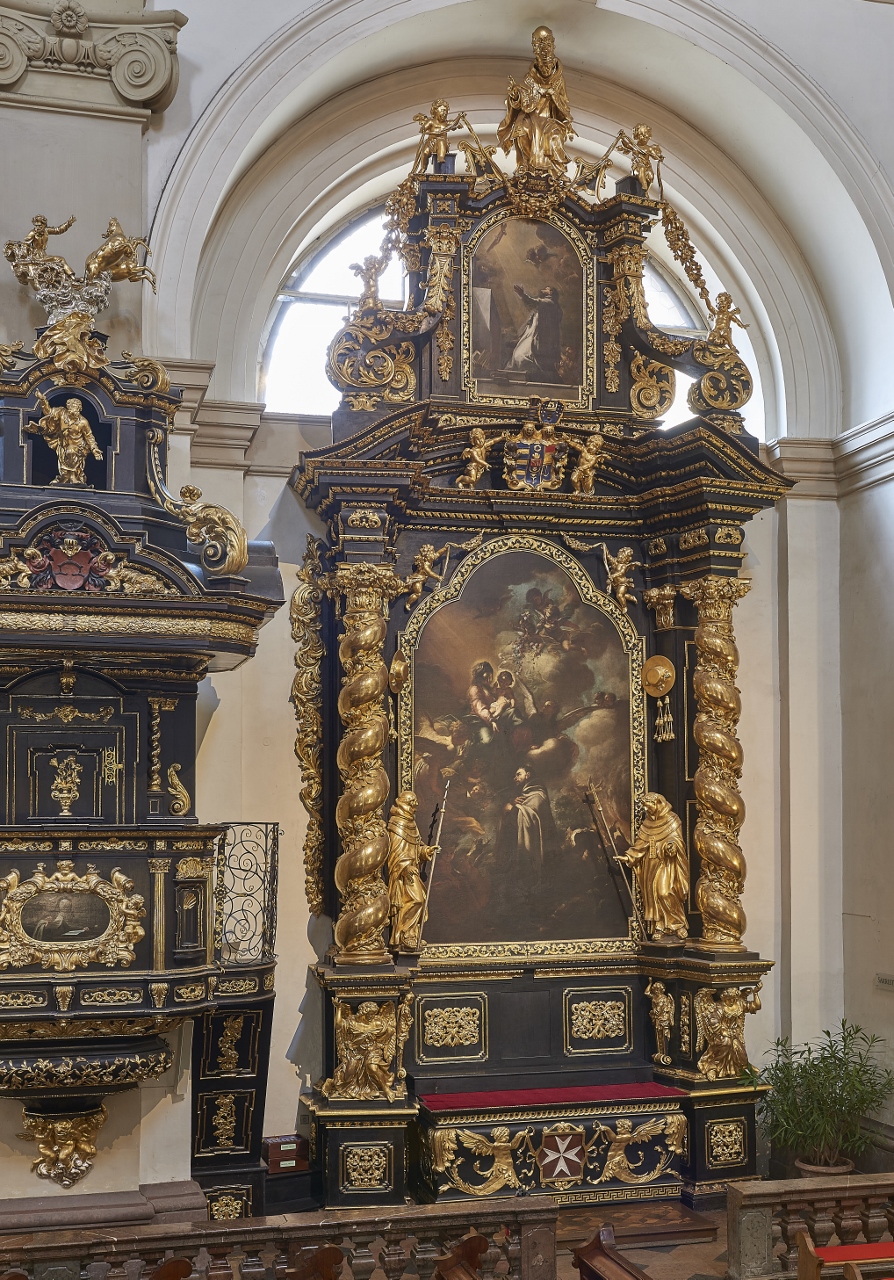 The picture of the dying St. Joseph at the presence of Our Lady and Christ is the work of Petr Brandl from 1720. 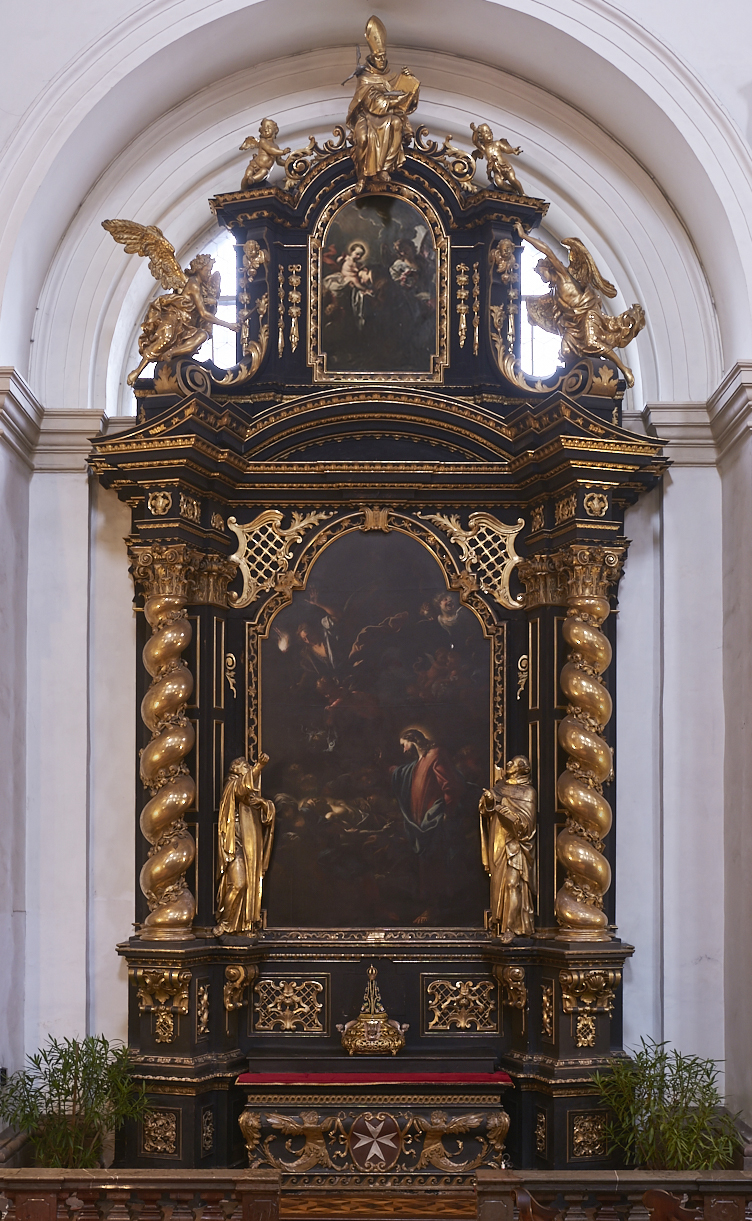 On the small roof is a statue of the Prophet Elias, the main patron of the Carmelite order, on a fiery wagon. Another Prophet from Mount Carmel, Eliseus, is catching his falling cloak. 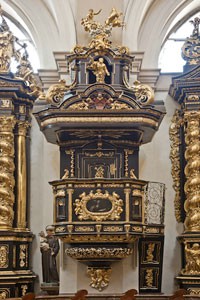 Altar of St. John of the Cross

Altar of St. John of the Cross

Pictures of Matěj Zimprecht from 1669.  Our Lady of Mantua is placed on the altar in a decorated silver case. This is a very venerated gracious picture. 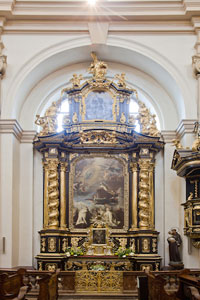 Parents of Our Lady. Picture of childless parents asking God for a child. The child will be Our Lady. 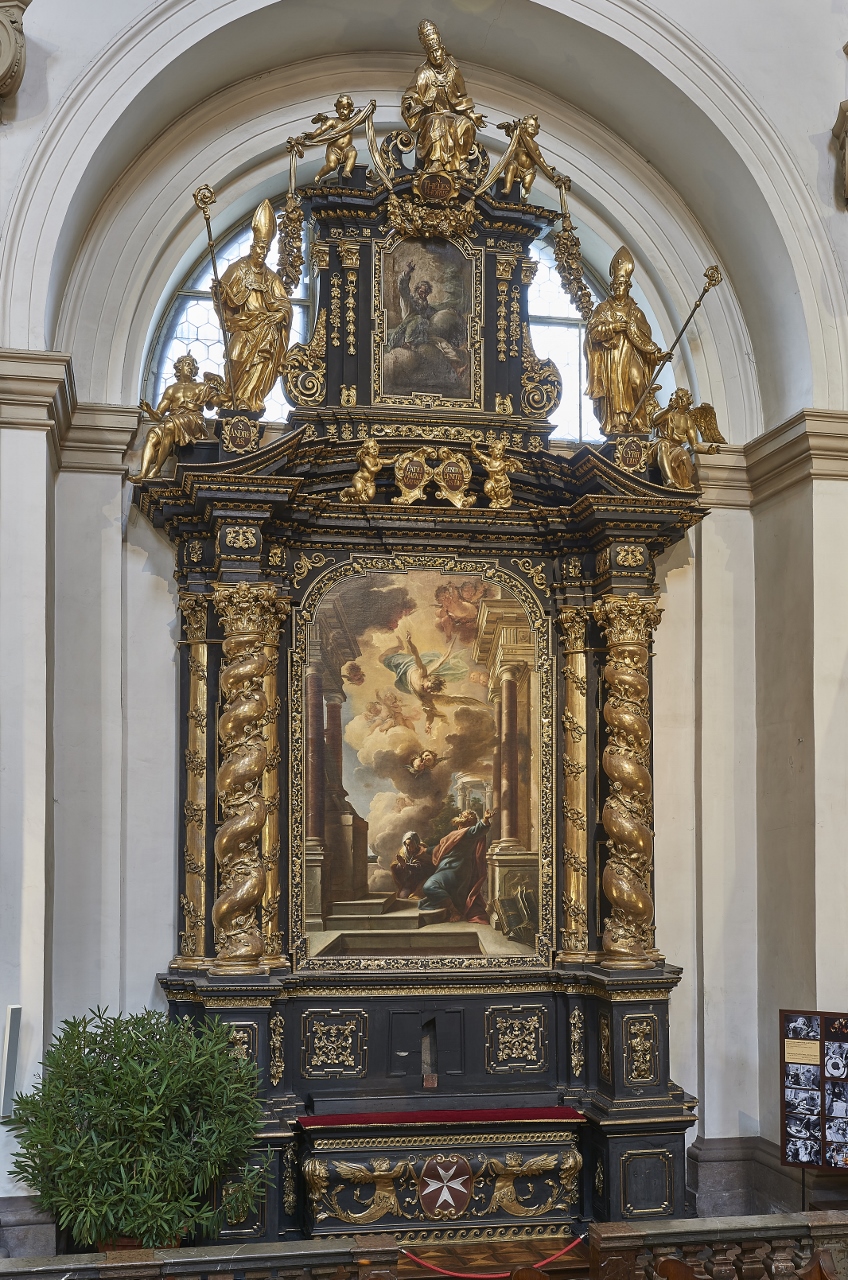 Chapel of Our Lady

Chapel of Our Lady

In a class case is a gracious statue of the Madonna from 1626. It is used as a confessional chapel. 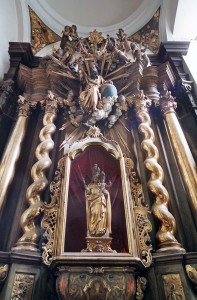 Altar of St. Teresa of Avila

Altar of St. Teresa of Avila

The bottom picture, the heart of St. Teresa being pierced with a fiery spear, was painted by Jan Jiří Dietrich in 1752. A new statue of St Thérèse of Lisieux, created by Jiří Kobr, was amended to the altar on Oct 1st, 2019.

The new statue was intended for the Altar of St. Teresa of Avila. So an idea suggested itself, to connect both Saint Teresas. To refer to the One, towards whom they both pointed their lives. This idea lead me through the creation of the composition and of the form of the statue. It was meant to be, as far as possible, an organic part of the altar. Its opening which makes contact with the surrounding. Considering the personality of Saint Thérèse of the Child Jesus it seemed almost inappropriate to create a statue that would be directly facing the visitors, sort of at the mercy of their views… Her words invited me to contemplate again and differently the nature of holiness and I learned that the holiness is a work – an intensive activity– in the first place. An activity that aims to the ability to devote oneself to the Love. (Jiří Kobr) 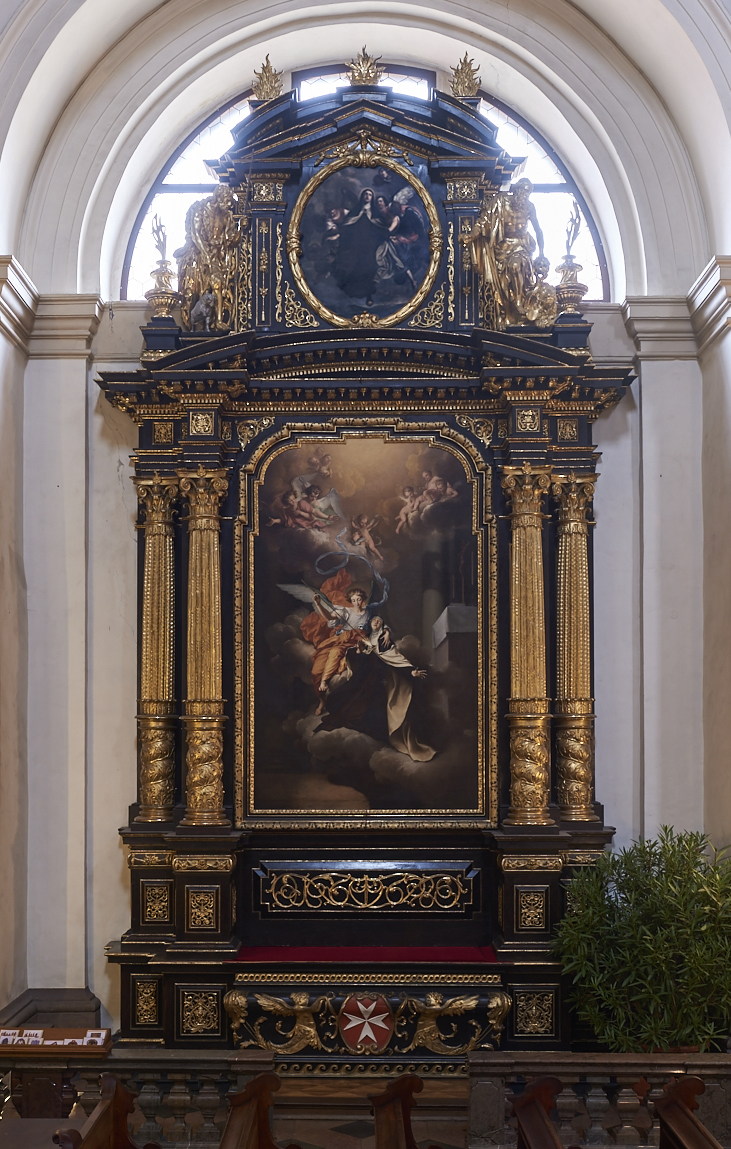 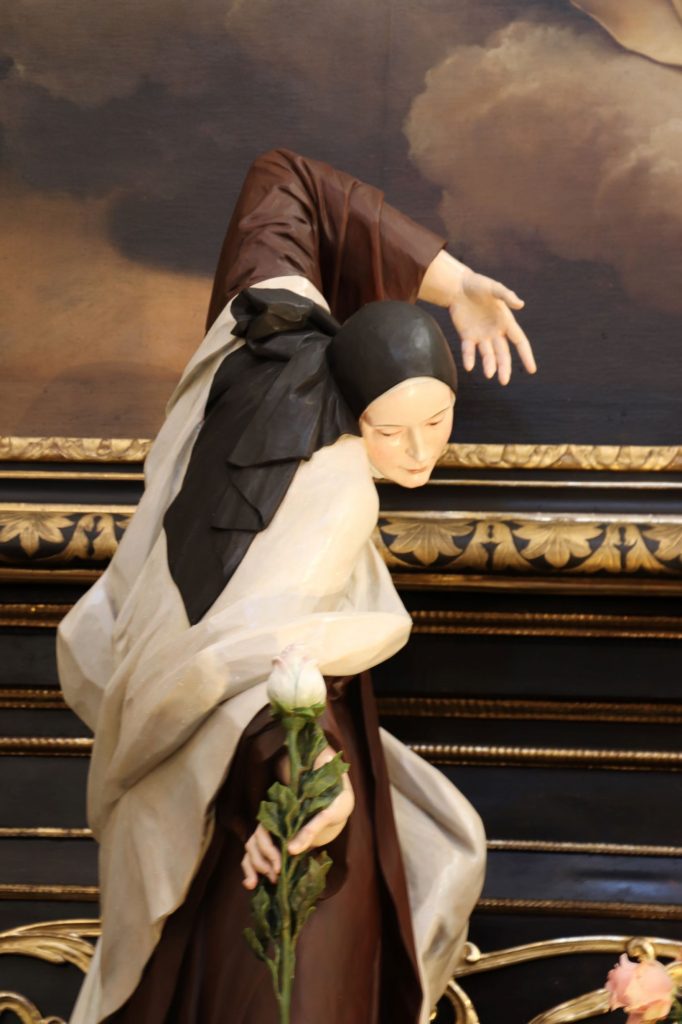 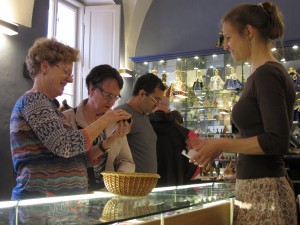 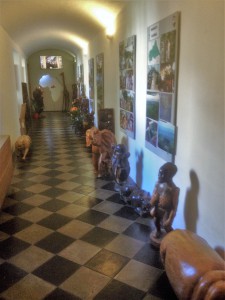 The ambo (pulpit) is the place from which the Word of God is proclaimed through the liturgy. It is usually in an elevated position.  In the Church of Our Lady of Victory, the pulpit is unusually located at the bottom and in the centre of the church. This positioning emphasises the descent of God’s Word among men. The ambo, as well as the altar table, cross, and font are the work of academic sculptor Otmar Oliva. The ambo became part of the interior of the church in 2015. The foot of the ambo was cast from a single piece of bronze with an onyx stone insert. The ambo is adorned with silver ribbons on two sides bearing the Latin inscriptions from John’s Gospel “In the beginning was the Word,” and “The Word made flesh”. 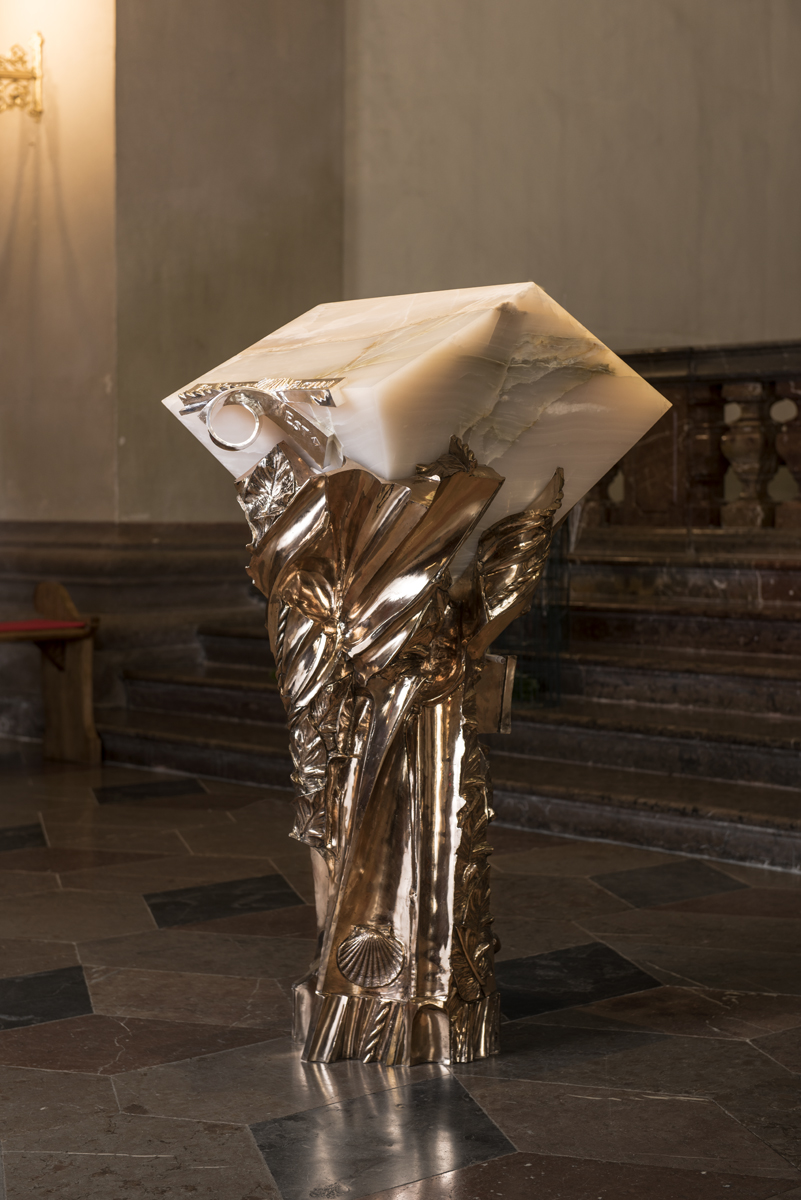 The baptismal font comes from the original Lutheran Church of the Holy Trinity. It was created in 2015 by academic sculptor Otmar Oliva together with the pulpit, the altar table and the cross, which are raised in the central line of the church.

The circular water tank and the triangular foot of the pedestal are original. At the time of its creation, the baptismal font also had a wooden cover which has not been preserved. The newly created circles and the three-armed canopy topped by a cross from Otmar Oliva build on the font’s well shape. The circular stone bowl has a stainless steel lining in the shape of a shell which faces the Infant. 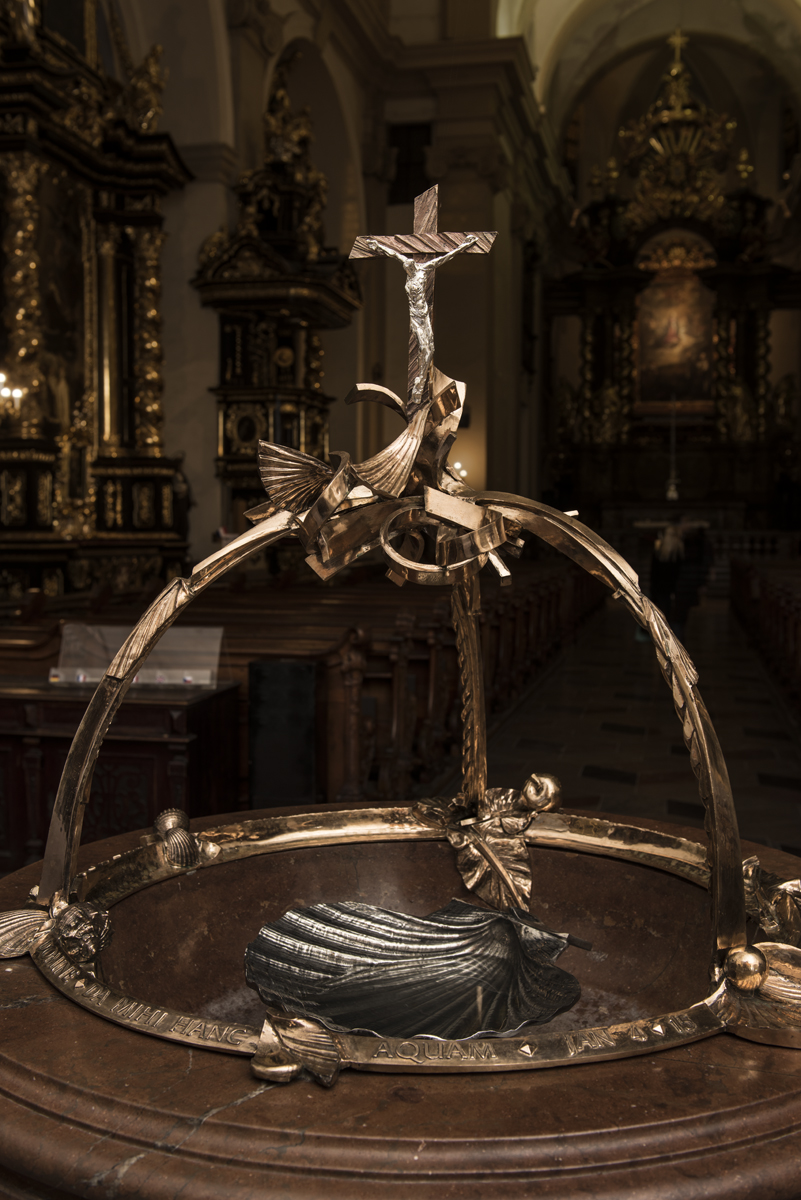